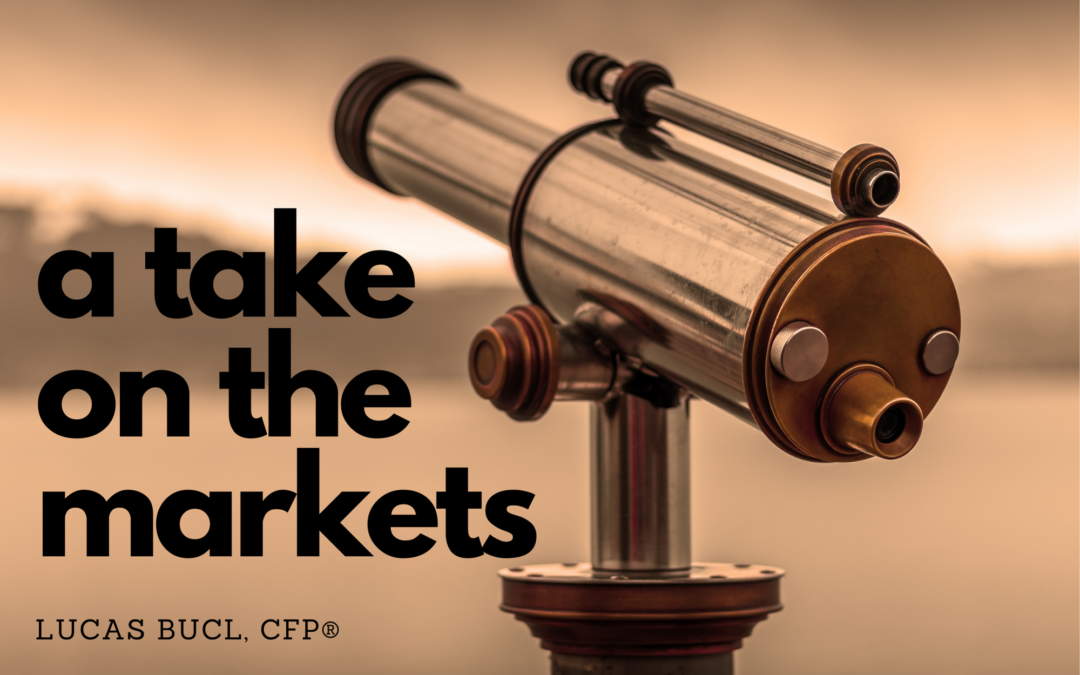 Stock and bond markets have been volatile recently.  Since early April, stock prices have steadily moved lower in response to a changing and uncertain investment environment.  Over the last several days we have seen large swings both up and down.  This is typical when the market is trying to find direction in the face of uncertainty.  The broad US stock market, as measured by the S&P 500, is down about 17% this year.  This is firmly in market correction territory and is approaching a bear market.1

Market corrections happen every 12-18 months based on history, so the fact that we are seeing one now is not unusual.  What is more notable is that certain asset types are seeing more dramatic declines, which are often reported prominently in the headlines.  See the table below for a sampling of year-to-date returns.  Higher risk, higher volatility assets have seen the largest drawdowns, most notably technology stocks and cryptocurrencies.  Since the pandemic started, we have seen assets flow into some of the most speculative assets, and these same assets have been repriced most aggressively over the past few months.

There are a lot of factors currently at play that are driving this market volatility.  The root of the issue is high inflation, running 8.3% over the last year as measured by the April Consumer Price Index (CPI).  The inflation story is multifaceted and starts back in the early days of the pandemic.  The economy was put into neutral as lockdowns occurred to blunt the spread of the coronavirus.  The economic conditions looked dire at the time.

The US Federal Reserve (the Fed) stepped up as the virus started to spread and cut interest rates to zero, increased their bond buying program, and rolled out various loan programs to businesses of all sizes.  Many of the loans in the Payroll Protection Program (PPP Loans) were forgiven, effectively making them direct cash transfers to businesses.  The concern at the time was that the economy would lurch to a halt and go into a freefall, so the Fed was doing everything it could to backstop the economy and the workers who were at risk of losing their jobs.

Suddenly Americans were awash with cash and had limited places and activities on which to spend.  Most thought we would be in for a multi-year downturn. The only clear way out of the situation was an effective vaccine, and even the most optimistic projections had a lead time of at least two years before one could hopefully be developed.  As we know now, scientific ingenuity backed with a lot of government cash helped develop multiple effective vaccines within a year of the pandemic outbreak.  This surprisingly quick development and distribution of vaccines here in the US and in other developed countries allowed us to re-open our economy faster than originally expected, with consumers and businesses both having excess cash on hand to burn.  This spiked demand, a key ingredient in the inflation story.

The sudden stop and then disorderly restart of manufacturing of goods snarled supply chains, and we are still dealing with the after-effects of this today.  These problems limited supply of key goods and commodities at the same time demand from individuals and businesses shot through the roof.  This combination has driven sudden and high inflation over the past year.

The Russian invasion of Ukraine in February of this year, and the resulting sanctions, added to the inflation problem by cutting off Russian energy and other commodities from most of the global economy.  This compounded some supply problems and increased transportation costs, driving up prices further.

The Fed, along with most economists, thought the initial burst of inflation that started to show itself in the spring of 2021 would be transitory and fade after several months, primarily driven by the supply chain issues which would be worked out.  In hindsight, it appears they underestimated the difficulty of resolving some of these issues, especially as COVID-19 continued to be uncontrolled in some developing countries.  They also underestimated the demand from the developed world as we quickly moved back to normal after the vaccine rollout.

After realizing inflation would likely not come back down on its own, the Fed signaled a policy change starting in December of 2021, and started raising interest rates to combat inflation in March of 2022.  They have signaled an aggressive plan to raise interest rates several times this year to get a handle on inflation.  This has caused market interest rates to move up quickly, and assets of all types have repriced as a result.  The assets that ran up the most during the pandemic, namely technology stocks, meme stocks, and cryptocurrencies, have fallen the most this year.

It is also worth noting that the fiscal stimulus from Congress is also reversing course this year.  After two years of major spending on stimulus, the budget deficit is falling dramatically.  As a percentage of GDP, the federal budget deficit was 15.1% in 2020, 12.4% in 2021, and projected to be just 3.4% for 2022.3  This substantial reduction in deficit spending should help alleviate some of the inflation pressure it caused over the last year.

Another notable change this year has been the decline of bond prices.  Typically, high quality bonds serve as ballast in a diversified portfolio, holding value or appreciating during times of stock market declines.  While bonds are down less than stocks this year, they have not functioned as the traditional shock absorber in a diversified portfolio the way they usually do. Bond prices move in the opposite direction of interest rates, and interest rates have moved up quickly this year as the Fed signaled they will be taking aggressive action.  We believe there is still a purpose for bonds in a portfolio, this year has been unusual given we started with exceptionally low interest rates.

No one knows precisely how things will play out from here, but we will walk through some ways this could go:

It is worth noting that there are many other scenarios that could play out, with the actual path unknowable.  We believe that maintaining a diversified portfolio is prudent because it provides long-term growth potential of stocks and real estate and the risk management elements of bonds and cash, especially in this uncertain environment.

During uncertain and gloomy times, it is important to use logic instead of emotion when making investment decisions.  When others are scared it is usually a good time to invest.  JP Morgan recently published some research showing that consumer confidence has dropped to its lowest level since 2011.  Going back to 1970, the S&P 500 has posted strong double-digit positive returns in subsequent 12-month periods after consumer confidence bottomed for the cycle.  This highlights the benefit of staying invested during tough times.

2 The indices listed are unmanaged indices that are intended to represent the movements of large classes of assets.  Investors cannot directly invest in any of the indices listed in the table.  The performance noted does not include expenses, fees, or charges, which would reduce an investor’s returns.

Lucas Bucl is a CERTIFIED FINANCIAL PLANNER professional and a member of Financial Planning Association of Greater Kansas City. He is a partner at Aspyre Wealth Partners in Overland Park, Kansas. Lucas helps clients define what success means to them, and then craft and execute a plan to achieve it.

Aspyre Wealth Partners® is a Fee Only financial services company located in Overland Park, Kansas. We are fiduciaries with a focus on: Financial Planning, Investment Management, Career Coaching, and Life Transitions. We update our blog frequently – click here for additional insights. Find out how well your money is serving you by taking our complimentary Return on Life (ROL) Assessment.