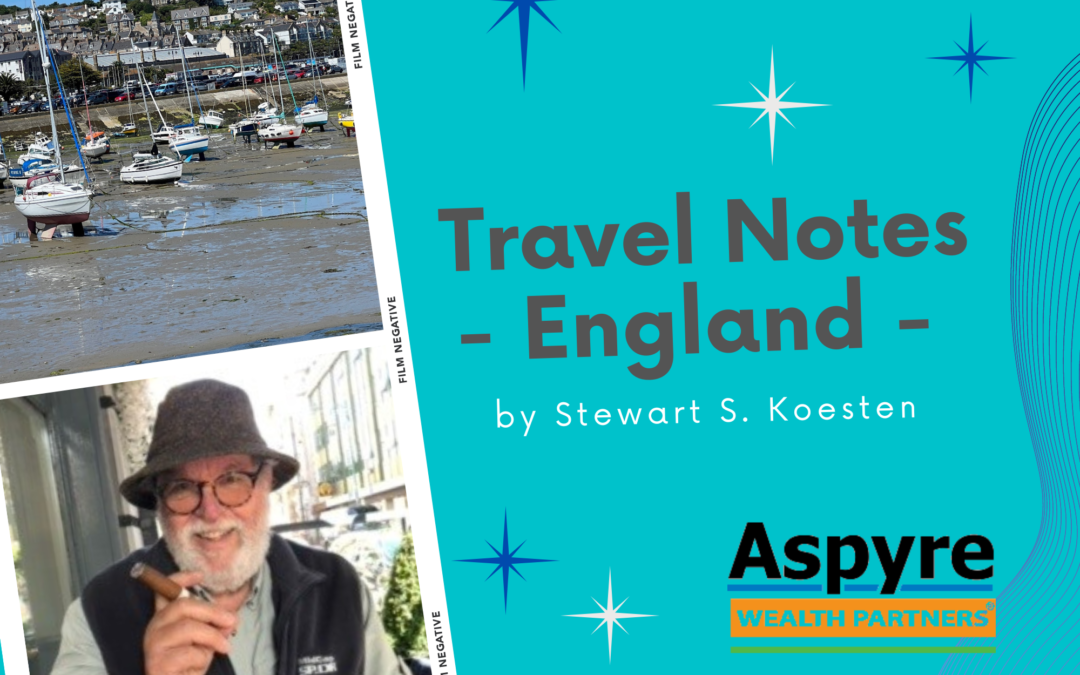 Looking for financial-savvy travel tips for traveling in England post-Covid? You are in the right place. Aspyre Wealth Partners® Chairman, Stewart S. Koesten recently completed the Cert(IM) designation through the Investment Migration Council (London). This is the first of two installments with his insights about things like exchange rates and getting around, plus the benefits of making plans in advance. Read on!

Joy and I were incredibly lucky in our recent travels abroad, a trip Joy dubbed our “COVID revenge” trip. After two years of trip cancellations, we were finally able to travel to England and Ireland! We were lucky in that our airline flights departed and arrived on time including connecting flights without any lost baggage. And we didn’t catch COVID!

Given the experience of people who had cancelled or delayed flights and lost baggage, we were very grateful.  We were also lucky that the U.S. Dollar is so strong, and that the British pound and the Euro are currently favorably priced to the dollar. In effect, compared to our trip to Portugal last year, we were able to take advantage of close to a 15% discount on hotels, cars, food, and occasional trinkets because of the favorable exchange rates.

But alas, nothing is ever perfect, and this trip had its moments. The biggest shock to me was the cost of rental cars.

A lot has changed over the­­­ past two years, especially the scarcity of cars worldwide. The word I would use to describe the rental car costs is “obscene!”  I won’t go into details here but let’s just say our first attempt at renting a car cost almost 2 times what the airfare to Ireland cost for our other five family members (the second half of our trip and the topic of my next blog)!  Happily, with a bit of research Joy found two alternatives to traditional rental car companies in both England and Ireland that in the end saved us half of what we would have paid otherwise.

In England Joy discovered Turo. Turo is a ride sharing program similar with Uber or Lyft except you rent the car without the driver. We spent two nights in London when we first arrived and then took a train to York, England to stay for two nights.

York is a beautiful community a couple hours north of London. You can take a hop-on-hop-off bus when you arrive as we did that takes you around town with a reasonably good tour guide on board showing and explaining the various points of interest in the community. We have used these buses several times in our travels. We feel it gives us a quick way to see the city and familiarize ourselves with the parts of the community we want to explore more. For example, In York we got off the bus and visited Royal Castle (also called Clifford’s Tower), an 11th century Norman castle keep with a very checkered and violent past.

From York we returned to London and visited Winston Churchill’s World War II Command Bunker, and we also had a fascinating tour of The Royal Albert Hall. One evening we met up with a High School friend of mine who lives in London. We all went out for dinner and afterwards his wife served us coffee and cakes in their garden. It was a delightful evening of reminiscing, storytelling and sharing current events.

Teslas and Jaguars and Peugeots

While taking a train to York was easy, that was not going to be the case traveling from London to Bletchley Park and then on to the Jaguar Heritage Trust and Museum in Gaydon, England. We arranged to rent a Turo car for the day to make the trip. Joy had signed us up for Turo online before we left the states (driver’s license and credit card needed).

We discovered that the young fellow from whom we rented the Tesla in south London is quite enterprising. He owns 7 or 8 cars that he rents through Turo. He says he makes a nice living and supplements his other business income. On the day of our day trip to Bletchley and the Car Museum, we met our Turo car owner and got a briefing on the operations of the Tesla; he handed us the keys and off we went.

Bletchley Park is fascinating. That’s where (for you “Imagination Game” movie fans) the Enigma Machine codes (Germany’s coding machine) were broken early in the war. The park is vast and takes a full three hours to run through the various exhibits including a mock-up of the electromechanical computer that was created there and used to break the German codes.

From Bletchley we drove to the Jaguar Heritage Trust in Gaydon, England. I wanted to see the largest collection of British cars in the world and their collection of Jaguar sports cars and sedans (I have a couple early Jaguars).  Unfortunately, we got there rather late in the afternoon and only had a couple hours or so to view the collection. The museums docent was rather curt with me when I shared with him that I owned several Jaguar cars. He said, “It is pronounced Jag-U-ar.”  Oh well!

One exhibit, all of Queen Elizabeth’s cars, was front and center in the exhibit hall and I got to see several early (1950s) LeMans-winning Jaguar sports cars.  Later that evening we returned the car to its owner, and he was kind enough to offer to drive us back to our hotel.  The next day our friends took the Chunnel over to Paris and we got in another Turo car (a Peugeot this time) to see some of the English countryside on our own.

We choose two locations from which to explore Cornwall and Devon. Our first stop was Plymouth where the Mayflower Pilgrims set sail in 1620! From there we took day trips to surrounding villages like Penzance and Port Isaac.  Port Isaac is the cute little village where the show “Doc Martin” is filmed. What a trip!

We were somewhat disappointment in the town of Penzance, England.  There is an outdoor theater there (The Minack Theater) some 25 minutes out of town by car that we wanted to visit. It is built into a hillside and looks out over the Atlantic Ocean.  We didn’t make reservations ahead of time, and they wouldn’t let us in. That was a learning experience and a lesson for us.

Our second stop was in Bristol where we stayed several nights, taking day trips to explore the surrounding area: Bath, Cardiff Wales, Stonehenge, and Gloucester. In Gloucester, we had a wonderful day exploring the ancestral home of Joy’s father ~ The Berkeley Castle! This 12th Century castle has been in the Berkeley (Barclay) family for over 9 centuries and has a fascinating history that includes the murder of King Edward II!

Our stay in England was generally delightful. We saw what we wanted to see, ate a lot of Fish and Chips, and Pasties (popovers filled with meat, cheese, onion, potato) and had a few ales to boot before heading over to Ireland to meet up with our kids and grandkids.

This was our second trip to England and I’m glad we ventured out to see parts of the country we hadn’t seen before. Maybe on our next trip to England we will focus on the midlands.

If you have an opportunity to visit England it will be a worthwhile trip. We are here to help you make travel part of your financial planning. Remember, planning pays off!

Stewart S. Koesten, M.S.F.S., CFP®, CIMA®, CERT(IM). is Chairman of Aspyre Wealth Partners with more than 35 years of experience as a wealth management advisor. Stewart especially enjoys working with people who travel or live abroad or those who want to travel or live abroad. Contact Stewart Koesten at (913) 345-1881.

Aspyre Wealth Partners® is a Fee Only financial services company located in Overland Park, Kansas. We are fiduciaries with a focus on: Financial Planning, Investment Management, Career Coaching, and Life Transitions. We update our blog frequently – click here for additional insights. Find out how well your money is serving you by taking our complimentary, 3-minute Return on Life (ROL) Assessment.